Athletes from the 1968 U.S. Olympic Team pose for a photo at the Olympic Training Center ​ 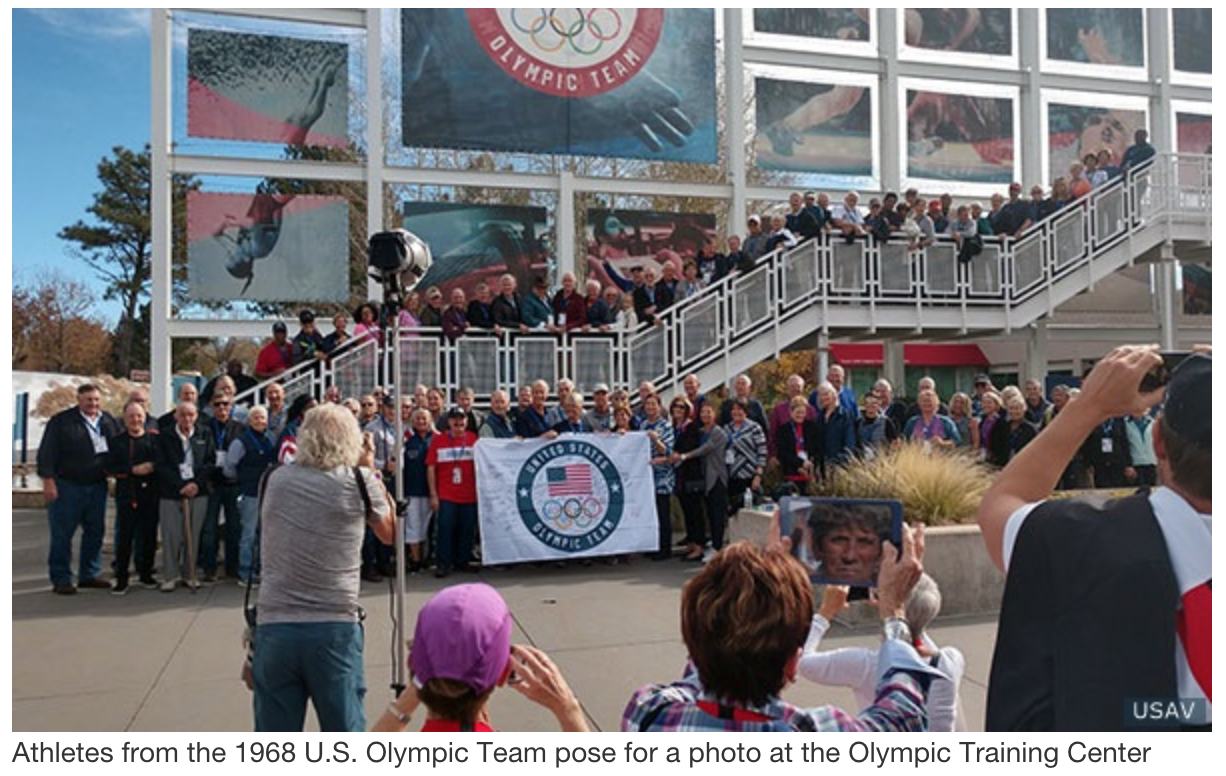 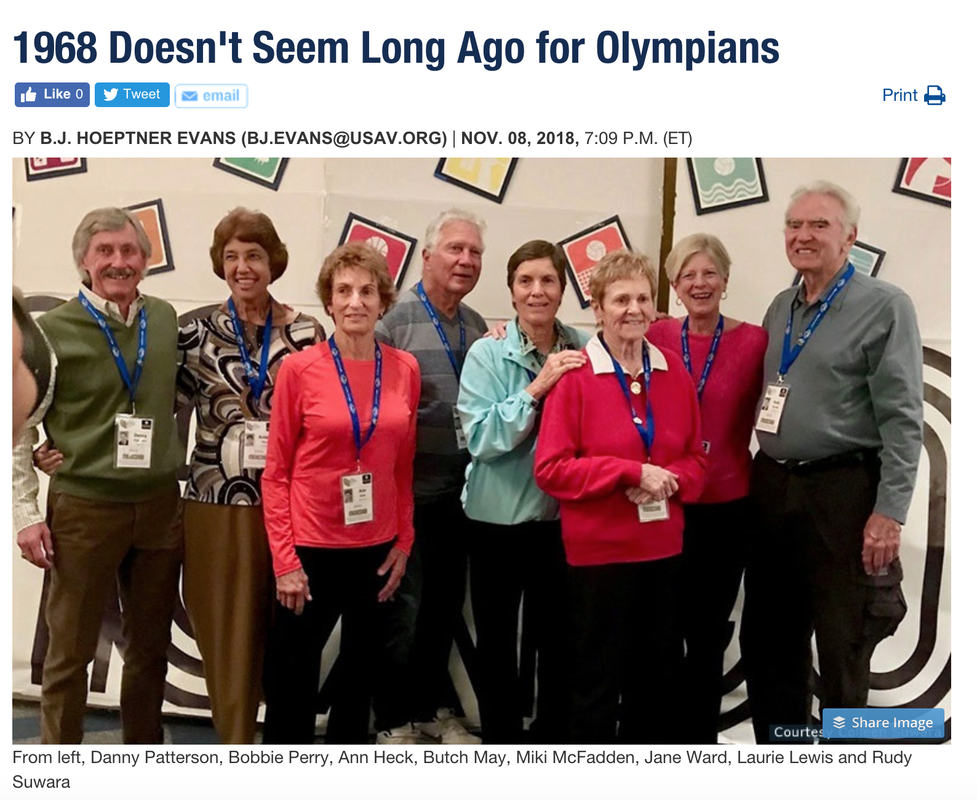 COLORADO SPRINGS, Colo. (Nov. 7, 2018) – It may have been 50 years ago, but 1968 feels like yesterday to athletes who competed on the U.S. Olympic women’s and men’s volleyball teams at the Mexico City Olympic Games. The U.S. Men’s Team finished seventh, going 4-5 and getting victories over the Soviet Union and Brazil among others. The U.S. Women went 0-7 and finished eighth.

Some of these Olympians visited the U.S. Olympic Training Center in Colorado Springs at the end of October for a reunion of the entire 1968 U.S. Olympic Team.

We asked them to tell us what they remembered about the 1968 Olympic Games in Mexico City.

Miki McFadden was named a USAV All-Time Great Player in 2014. She joined the U.S. Women’s National Team as a freshman at the University of Southern California. During her six years on the National Team, she earned the silver medal at the 1967 FIVB World Championship and played at the 1968 Olympic Games and the 1971 Pan American Games.
​
“It’s so much fun to see old teammates; not just volleyball, but people you got to know from other sports.
“These facilities (at the U.S. Olympic Training Center) are incredible. We are so jealous. We had no knowledge of training. It just wasn’t there at that point. There were injuries. I’ve had two knee replacements. A lot of people I talk to say, ‘Yeah, coming up on my second.’ Shoulders, knees; there wasn’t any pre-training to help strengthen like they do now.

“My daughter (Nila Lukens) is a senior at Southern Oregon University, playing volleyball. I just look at her and say, ‘wow.’ She’s been able to get in shape with yoga and strength training; things that we never had the opportunity to do. I’m happy that they’re doing it now and that we sort of paved the way by saying, ‘Hey, let’s make things better.’ “We trained in Southern California and then right before the Olympics we trained at South Lake Tahoe High School. That was our high-altitude training. But it was just a couple weeks.

In 1968, “I was 20. I was just a baby. (I remember) the whole atmosphere, meeting all the athletes, going to different events. I saw all the amazing track events that happened. You know John Carlos, Tommy Smith, I hung out with those guys. I saw Bob Beamon. I look back on the history of it, for me, is like, wow, that was amazing history.”

Jane Ward was selected to the first two U.S. Olympic Volleyball Teams in 1964 and 1968. She was a member of the 1956 and 1960 U.S. teams at the FIVB World Championships and also played in three Pan American Games winning a gold medal in 1967. In 1969, Ward was the first female player to be honored with USAV’s All-Time Great Player Award. She was one of the first two women (along with Flo Hyman) inducted into the Volleyball Hall of Fame in 1988.
​
The 1968 Olympic Games were “good. I enjoyed it. Unfortunately, (the best memory would have been) winning, and we didn’t do that. We tried. We couldn’t make it with no backgrounds; with no competition; with no help; with no training; with no money; without anything else that they have today, which is wonderful.”

Ann Heck was with the U.S. Women’s National Team that won gold at the 1967 Pan American Games before competing with the team at the 1968 Olympic Games. She went on to coach volleyball at Long Beach State and at the community college level at San Diego Mesa College. She is a member of the California Community College Athletic Association Hall of Fame.

“For me, it was just the opportunity to finally be on a team somewhere. There were no high school teams. No college teams. You couldn’t even do any weight training. I was teaching at USC at the time and I tried to use the weight room and they said, ‘You can’t go down there, that’s only for men.’ If you wanted to get on the floor you had to be a cheerleader for the boys’ team.”

Marilyn McReavy Nolen earned a spot on the national volleyball team following the 1967 open tryouts. The Texas native was part of the gold-medal U.S. team that captured the 1967 Pan American Games title in her first international competition. After the 1968 Olympics, Nolen played through the mid-1970s and was on the first U.S. women’s team to defeat Japan in 1972. She went on to coach and Nolen was inducted into the American Volleyball Coaches Association Hall of Fame as an inaugural member in 2003.

“It was a wild time. The things I remember as being able to eat in all the cafeterias. Every country had their own, so you could go around and eat all this different food. There was some concern we might get sick by eating different food. Early in the morning, I would go down to the track, which was way down below. I would just sit on the wall and watch these phenomenal human beings as they worked out in the morning on the track. It was an amazing thing. I can remember it like it was yesterday.

“I think the other thing was the fact that there were not that many women there. We had a hotel and there was a fence around it and we were guarded. I thought that was unusual.

“But also, going to downtown and hanging around. The traffic and the people We traded everything. I brought my dad back this bright yellow jacket from France that I traded for. He wore it forever. I managed to get the West German warm-up stuff. Everybody was after it. All the different pins.”

Butch May grew up in Honolulu where he attended the St. Louis School. He settled in Los Angeles and played with the U.S. Men’s National Team at the 1968 Olympics before switching to beach volleyball and playing alongside Wilt Chamberlain and Bill Walton. He later coached. His daughter, Misty May-Treanor, went on to win three Olympic gold medals with partner Kerri Walsh Jennings.
“We were fortunate to have our opener against Russia. The neat part about it was we woke up the sleeping bear. The overall Games for me was an experience that I wish every athlete could have. The Opening Ceremony gives you goose pimples. The Closing Ceremony. The camaraderie you have with other athletes. There’s a language barrier, but you all know you are there for the same reason. Jessie Owens said, ‘We were all winners there.’ It puts you in a mindset. But he put a rider on it: “On a given day, there is only one champion.

“Volleyball on the beach has gotten better. The athletes have gotten bigger. They don’t train the way they used to. They should use facilities like this to condition their bodies. It’s fun to watch. I have to say this. If I have to watch anyone play, I like watching my daughter play.

“In 1968, you were actually on your own. You trained differently. If your jump was better than somebody else’s, you never really talked about what you did. “Misty’s not afraid to tell people, you may train with the volleyball for two-and-a-half or three hours. But after that, you train for another six hours. When I say train, I mean specific muscles, change your diet, change everything. Not everyone is willing to do that. But the best are.” Players who attended the reunion were: Ann Heck, Laurie Lewis Havel, Butch May, Miki McFadden, Marilyn McReavy Nolen, Bobbie Perry, Danny Patterson, Rudy Suwara, and Jane Ward.
©2007-2019 brvc, LLC.  All Rights Reserved.