HYMAN UH_USA
Volleyball All-Time Had love for game -
Volleyball all-timer had love for game Whether it was competing in the Olympics in Mexico City or driving a bus on the streets of Honolulu, volleyball great Fanny K. Hopeau is remembered for the smile and infectious joy she shared with others.
Hopeau, 74, a seven-time All-American, died on July 27 in Honolulu.
“I loved to see her substituted into our matches because she kind of galloped in, she was so excited,” recalled Sharon Peterson, a teammate on the 1968 U.S. Olympic and 1967 Pan American volleyball teams. “A lot of other people would just walk up (to the court) there,but she was so happy, so fearless and just wanted to play. I was really impressed with her that way.”
ADVERTISINGHopeau spent 29 years as a driver with “The Bus,” where she was known as “Auntie Aloha” with an ever-present flower in her hair until retirement in 2008. “She was really happy-go-lucky,” Peterson said.
Hopeau was graduate of Roosevelt High and starred on Nuuanu YMCA and Nick’s Fishmarket teams as well as U.S. National squads.
“She was a fabulous player, very powerful hitter and great teammate to have,” said Barbara “Bobbie” Perry, a teammate on the national and Olympic teams. “She gave it her all. When she hit the ball it was, ‘wow!’ ”
Hopeau was part of a silver-medal-winning U.S. team at the 1966 World Games in Japan and the gold medal U.S. team in the 1967 Pan American Games in Winnipeg, Canada, and competed in the Mexico City Olympics a year later. She returned to international competition in 1971, helping the U.S. to a silver medal in the Pan American Games in Cali, Colombia.
Hopeau was inducted into the Hawaii Sports Hall of Fame in 1999. In 2010 she received the national Flo Hyman All-Time Great Player Award for her play and directing youngsters in volleyball.
Visitation is at 9:30 a.m. Saturday, with services at 10:30 a.m. at Borthwick Mortuary Maunakea Chapel and a 2 p.m. burial at Hawaiian Memorial Park Cemetery. 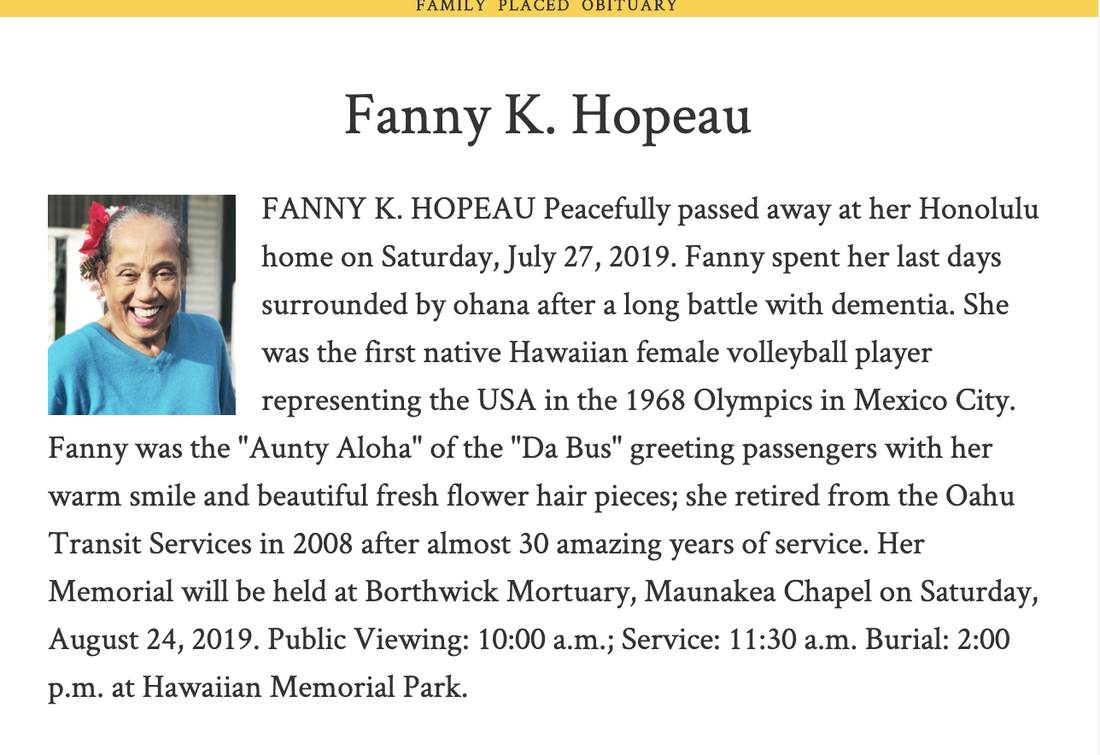