Review: ‘The Witches of the Orient’ casts a golden spell rooted in skill and hard work

BY ROBERT ABELE
JULY 15, 2021 3:27 PM PT
The Times is committed to reviewing theatrical film releases during the COVID-19 pandemic. Because moviegoing carries risks during this time, we remind readers to follow health and safety guidelines as outlined by the Centers for Disease Control and Prevention and local health officials.
Since it appears we’ll all have to watch the pandemic-bedeviled 2021 Tokyo Games from our homes — even the fans in Tokyo — why not mix in some Olympic cinema with your at-all-hours sports viewing, and specifically a tale from the last time Tokyo hosted, no less?
The offbeat, mixed-style documentary “The Witches of the Orient” from French filmmaker Julien Faraut recounts the remarkable success of Japan’s formidable women’s volleyball team, a late-’50s/early-’60s serving-blocking-spiking powerhouse that once racked up a jaw-dropping 258 straight victories, most notably gold at the Tokyo Olympics in 1964. It was the first year the Olympics showcased volleyball.
This wasn’t, however, an elite group plucked from all corners of the island nation but instead a company team assembled by textile manufacturer Nichibo from workers at one plant in Kaizuka, near Osaka. The women proved to be so winning a machine that their prowess was patronizingly labeled supernatural by a gobsmacked Russian media after the Soviets lost to them. The reality, of course, was that the Nichibo Kaizuka “Witches” trained insanely hard under their ex-army war veteran coach, Hirofumi Daimatsu, called a “demon” when Western press reported on his grueling (read: discourteous) regimens. But the women loved and respected his methods. They wanted, after all, to be the best.
ADVERTISINGBesides, results are results. In Japan, this disciplined team’s match heroics inspired a pop culture wave of sports-themed manga and anime — most famously the volleyball saga “Attack No. 1” — which did as much in Japan to burnish female power narratives in those formats as any other story type. And it’s that quality-of-a-champion narrative in sports to echo what’s human about us yet foster the fable-like and mythological — They’re just people! They’re superhuman! — that Faraut attempts to evoke with his experimental blend of interview, vérité and archival footage, anime, music, sound and editing effects.
Faraut’s last unconventional sports documentary was “John McEnroe: In the Realm of Perfection,” a repurposing of film shot of the American tennis icon at the 1985 French Open into a meditative disquisition on one edgy master’s athletic mind-set. “Witches” is a bit more traditional, if mostly because Faraut has to tell the story of the team, which he does through on-screen text, audio recollections from five of the women, now in their 70s and 80s (seen occasionally in their daily lives) and highlights from key tournaments. Even knowing they won the gold in 1964, watching their showdown against the Soviet Union in the finals is no less thrilling, especially after the film establishes what the competition meant for postwar Japan.
It’s obvious that Faraut’s most fertile aesthetic energies aren’t directed toward a typically treacly sports doc arc but rather to finessing his handful of trancelike montages of the human body pushed to its limits. Fusing exquisitely shot color 16mm footage from 1964 of the team’s training sessions, drone-like music and splices of animation, we get a delirious sense of what these committed women endured six out of seven days a week. One hypnotic sequence juxtaposes their rhythmic drills to the machines a few buildings over pumping out fabric. Another, set to Portishead’s “Machine Gun,” of the women falling down, getting up, falling down, getting up, while Daimatsu dispassionately fires volleyballs at them, looks like cruelty, until it starts to feel like how match-tough warriors are made.
“The Witches of the Orient” is a team saga, not a personality parade. We learn their nicknames, hear memories, see them eating together, watch one doing leg lifts at her gym and another teaching volleyball, but Faraut doesn’t take pains to differentiate them after the initial roll call. Each voice-over lands like a collective thought. When one speaks to how, after reentering regular life, everything seemed easy, and other people’s complaints seemed negligible, you believe this is what they all felt. In a sense, these “Witches” did have powers, but the kind earned through rigor, pressure and skill, and celebrated in a victory that’s one of the most watched televised events in their nation’s history.


PAID CONTENTThis Olympian nearly skipped the appointment that saved her lifeBy GSKA routine visit led to Shannon Miller’s cancer diagnosis. She’s spreading the word about the importance of regular care.
'The Witches of the Orient'
In Japanese with English subtitles


MOVIESENTERTAINMENT & ARTSTOKYO SUMMER OLYMPICS
NewsletterInside the business of entertainment
The Wide Shot brings you news, analysis and insights on everything from streaming wars to production — and what it all means for the future.
Enter email address
SIGN ME UPYou may occasionally receive promotional content from the Los Angeles Times.

Copyright © 2021, Los Angeles Times | Terms of Service | Privacy Policy | CA Notice of Collection | Do Not Sell My Personal Information
The photo and information was provided by Colleen Suwara to Linda Murphy's Pioneer distribution email list.  The first US Olympic Volleyball Teams  which competed in the 1964 Olympics in Tokyo, Japan . 6.21.2016 posted by RNN 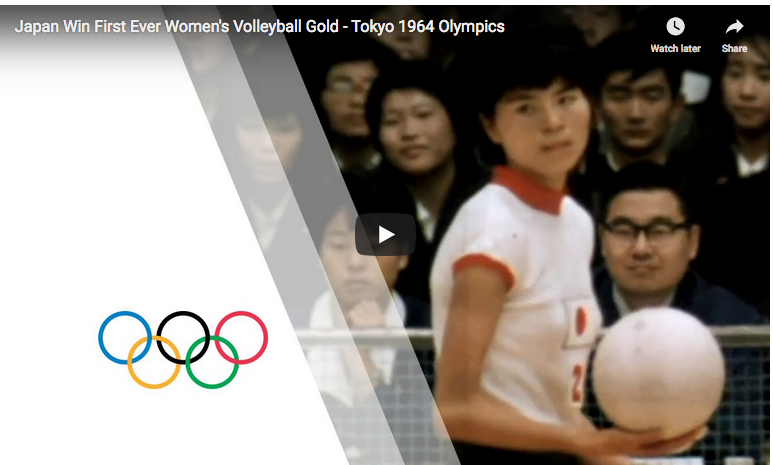 All photos / logos / name and image on all pages of this site may NOT be used without WRITTEN permission by brvc, LLC
A special thank you to USA Volleyball for sharing USA photos of Flo Hyman